18 Holes with "The Enemy": A Round of Golf with Mark May 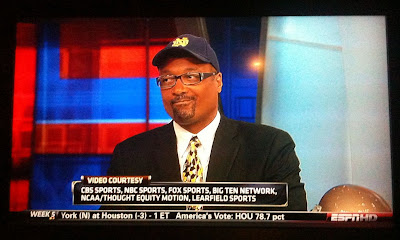 Last summer my Dad and I were lucky enough to receive invitations to play in the Irish Legends Golf Tournament, an event hosted by Lou Holtz and Ara Parseghian at Lost Dunes Golf Club supporting both of their charities. We have very good family friends—Skip and Mike—who are closely involved with the orchestration of the event each year and they wanted us to come out and experience the day.

The guest list alone could’ve lured me out: Lou and Ara, former Heisman winners, Notre Dame Greats that I’d learned to revere thanks to books and stories from my father. This was a veritable smorgasbord for someone who eats up Irish History.

Mike and Skip insisted they’d set up my Dad and I with a great pairing. As the weeks flew by and the day of the tournament approached, I began to speculate on who my celebrity partner may be. The potential names raced through my head.

Would it be one of the men charged with saving Notre Dame Football, Brian Kelly or Jack Swarbrick? Could be Johnny Lujack or Johnny Lattner?

Or maybe—heart, be still—I was going to be spending 18 holes with Dr. Lou.

After flying into South Bend my Dad and I grabbed a rental car and sped off toward Lost Dunes. We got in around 10:30pm and grabbed drinks with Skip, Mike, and host of others who were staying on the property. They’d both known who I was going to play with for months since they essentially organized the entire tournament, but they wanted to wait to tell me in person so they could see my reaction.

That had to be a good thing, right? They were friends with Lou, they wanted to get that same feeling the guy from the “My Wish” segments on SportsCenter gets when he makes a kid’s dream come true. That had to be it.

Mike smiled and bellowed, “Alright Matt, you want to know who you’re playing with?”

I nodded and grinned from ear-to-ear.

The grin was replaced with an expression that mixed confusion, disappointment, shock, and more confusion. I thought he may be kidding; after all, going to an Irish Legends Tournament and being paired with Mark May was like being paired with Rush Limbaugh at a Democratic Party fundraising golf outing.

The entire room cracked up with laughter as I stared off into space trying to wrap my mind around what I’d just been told. One of the other players in our group, former Notre Dame basketball and baseball player (and Major League pitcher) Ron Reed, leaned over to me and said half-joking/half-serious, “Matt, you hit’m high and I’ll hit’m low.”

May has essentially been public enemy #1 in the Notre Dame Universe the past six years. He’s always very vocal and opinionated—and most of his very vocal opinions pertaining to the Irish have not been favorable. His analysis on Notre Dame more often than not has led me to yell at my television and heave whatever projectile was closest to me—pillows, remotes, cushions, lamps, puppies, etc—at the screen even when no one else was around.

That night as I lay in bed I thought about what I wanted to ask him. Really it could be summed up in a single word: Why?

Why did it always seem like he was anti-Notre Dame? Did it stem from his playing days? Was it the fact that Notre Dame (9-1-1) was chosen to play in the 1980 Sugar Bowl to face Georgia instead of his Pitt Panthers (10-1)?

That was the one thing I was determined to find out and report back to all of Notre Dame Nation—the root of Mark May’s “hatred” of Notre Dame.

Morning broke and soon I found myself face-to-face with the hulking College Football Hall of Famer. Much to my surprise he had no devil horns atop his head and when I made eye contact I did not turn to stone. In fact, he was very cordial when he introduced himself and we sat down to have lunch with my Dad and Coach Holtz.

A clever trick I thought, attempting to lull me into a false sense of security. I was still going to keep a crucifix and “Exorcisms for Dummies” in my golf bag though.

There’s an old saying that you can learn more about a man’s character in four hours on a golf course than anywhere else in the world. Well, I learned a lot about Mark May that day.

Mark and I shared a cart so we spent most of the time between shots chatting about golf, life in the sports media business, and college football in general.

I found out right away that when he makes solid contact with a golf ball it takes off like it was launched by NASA and doesn’t land until it’s traveled approximately one mile. That mile may not be even vaguely in the direction of the intended target, but the ball is hit so hard it wishes it was never even born.

I also learned that few people work harder at their craft than Mark May.

People may think the sports media business is a cake job, but they’re sorely mistaken. Much like the sport of football itself, the time spent on camera is dwarfed by the hours upon hours of preparation leading up to it.

Mark reads through hundreds of pages of game reports and stat sheets every week before he even shows up to work for Thursday. You can tell some analysts glance at a summary of teams before they head on the air and then vehemently argue points even though they don’t have a firm grasp on what the full story is.

Mark isn’t one of them.

The preparation for the next week begins on his plane ride back to his home in Arizona on Sunday and goes straight through until he returns for the Thursday games. Even if you don’t like his analysis, when you hear how much effort he puts into it you can’t help but respect it.

Inevitably the conversation shifted to Notre Dame, and as it did I began to brace myself. As an Irish fan, I was conditioned in an almost Pavlovian manner to get upset whenever I heard Mark May talk about Notre Dame on television.

When I asked why he seemed to dislike the Irish so much he gave the response you’d expect him to at a Notre Dame charity event: “I don’t hate Notre Dame, I don’t hate any teams.”

“The fact is each time I picked against Notre Dame or said they weren’t going to do well it’s because I thought that was going to be the case—and look, most of the time other than 2005 I was right!”

(Alright, you’ve got me there.)

(This is making too much sense. I’m having a hard time computing this.)

The most shocking thing? I believed every word.

First of all, he’s such a straight shooter that it’d be a complete reversal of character to just BS for a random college football fan. Secondly, if you spend five minutes talking with Mark you understand how seriously he takes his job. He puts so much thought and effort into what he does that it’s almost insulting to infer there’s any room for unwarranted favoritism or agendas.

I know what you’re thinking at this point. “So you spend five hours with the guy, he’s nice, and you just completely flip your opinion, disregarding the years of anguish he caused you. Mattare, you are a weak little boy.”

That’s really not the case at all.

Spending time with Mark simply gave me perspective on where he’s coming from when he says what he does—and more specifically how he says it.

The thing that chaps Notre Dame fans the most is not just the fact that May constantly chooses against the Irish, it’s how he needles our beloved Lou Holtz and seems to take delight in those negative predictions. You begin to understand why he hams it up a little bit on-air though when you see him interact with Lou when the cameras aren’t rolling.

It may come as a surprise to some, but Lou and Mark genuinely like and enjoy each other. They bust each others’ chops like they’ve known each other since childhood and have a fantastic rapport even in a casual setting.

Imagine if you were on television every week with one of your best friends from high school who went to a different school with a major college football program. You’d give him the business any time you could about his team, especially if you knew it’d rile him up each and every time without fail. That’s exactly how Mark and Lou interact.

Mark says what he believes; he won’t predict Notre Dame failure for the sake of doing it or because of some deep-rooted vendetta. What he will do though is dig the knife a little deeper when it comes to the Irish just to get a reaction out of his counterpart. That always bothered me, but not anymore after seeing them interact at the tournament.

At the end of the day, Mark got up and said a few words at the post-round dinner. He joked right away about how he considered wearing Kevlar to the tournament since he knows he’s not the most beloved media figure in the eyes of Irish fans.

After echoing his previous statement about ND posting 10 wins in 2010, he thanked everyone for taking part in the event and being so kind over the course of his visit. He especially marveled at how the Notre Dame Family was just as welcoming as Lou said it would be, going so far as to say that he now considered it his second college “family” along with his alma mater Pittsburgh.

As Mark May stepped down from the podium, over 100 Notre Dame fans gave him a round of applause. Read that sentence again. If there was a ever a moment where I felt like I was living in Bizarro World that was it.

Spending the day with Mark completely changed my view of the Mark May “the personality” we all see on television. I watched Lou and his banter all fall in a brand new light after my experience, one that left me with a profound sense of respect and appreciation for the effort he puts into his job and a true belief that he harbors no ill will toward the University of Notre Dame’s football program.

That being said, all the respect and appreciation in the world couldn’t have saved my television screen from the projectiles I hoisted at it every time he picked against Notre Dame.

Some things just don’t change.
Posted by Mattare at 11:01 PM

Email ThisBlogThis!Share to TwitterShare to FacebookShare to Pinterest
Labels: Mattare

Most Read of We Never Graduate